– Correlation between app owners and other travel apps is very high

BOSTON, March 26, 2015 /PRNewswire/ — According to the recent report TripAdvisor: A Gateway App published by Strategy Analytics, TripAdvisor users are on average 3x more likely to own an airline, hotel or OTA app than those without TripAdvisor installed. As travel apps continue to grow their installed base, TripAdvisor could be the travel industry’s key to finding an engaged audience. 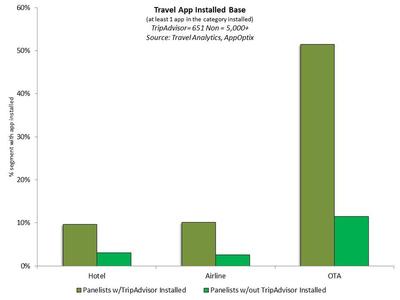 According to AppOptix, travel apps represent less than 1% of all mobile device sessions. Further, hotel and airline apps have a sub 3% installed base. To say it is difficult to find engaged travel users on mobile is an understatement. However, TripAdvisor transcends these paradigms. It has an installed base in excess of 10% while also being highly correlated to ownership of other travel apps.

Despite this higher correlation there are still many TripAdvisor owners that have yet to install a hotel, airline or OTA app. This headroom makes TripAdvisor an important channel for travel companies as they seek to gain exposure with mobile users. Hotels are investing heavily in new features – such as app based room keys – that need broader adoption. Airlines too are investing in apps – integrating new technology such as passport scanning – but are being outmaneuvered by Google Now.

According to Josh Martin, Travel Analytics Research Service Director, "As TripAdvisor continues to define its mobile strategy – partnering with those in travel to promote their brands alongside highlighted destinations – could be a win for all in the industry. In order to earn return on their app investments companies need to increase usage and TripAdvisor is a channel to finding those that are highly interested in travel."