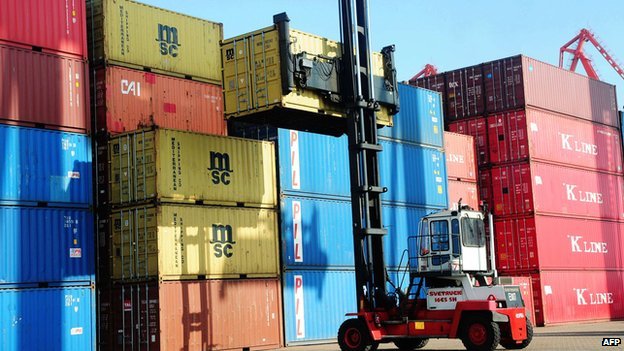 China’s exports grew in May but a drop in imports signalled a possible weakening of demand in the world’s second-largest economy.

The country’s exports rose by 7% in May compared with 12 months before. But imports fell by 1.6% on a year earlier.

It meant the nation’s trade surplus widened sharply to $35.9bn (£21.4bn), from April’s $18.5bn, the General Administration of Customs said.

The figures will add to recent concern about the state of the Chinese economy.

It has shown signs of weakness amid poor data from the manufacturing and retail sectors.

The country’s commerce ministry had hoped the trade picture would pick up in May.

Some experts believe the weak trade figures are partly due to an unnatural comparison with last year, when there was a glut of fake invoicing of exports as a way of getting around impending currency restrictions.

There has been a crackdown on such activities since May 2013.

“The data shows that the country’s exports growth has returned to a normal level and will continue to improve,” customs office spokesman Zheng Yuesheng told state television.

The Chinese government is aiming for total trade to grow 7.5% this year. Last year trade grew by 7.6%, below the official target of 8%.

Study finds brands have yet to create the post-COVID-19 digital and mobile experiences customers value most Many pandemic-induced behaviors are here to stay, presenting digital transformation opportunities, according to a study conducte