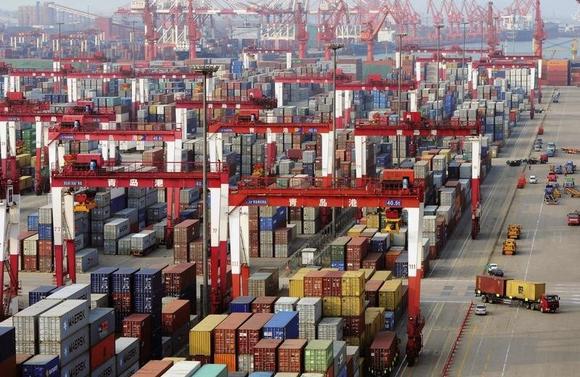 Trucks drive past piles of shipping containers at the Qingdao port in Qingdao, Shandong province June 8, 2014.

(Reuters) – China’s buoyant exports pushed its trade surplus to a record in July, fuelling optimism global demand will help counter pressure on the domestic economy from a weakening property sector.

While manufacturing appears to have picked up in the world’s second-largest economy, unexpected weakness in the services sector this week has renewed concerns about the growth outlook. The weak housing market remains China’s biggest risk, posing a drag on the broader economy and investor confidence.

Exports in July jumped 14.5 percent from a year earlier – the fastest pace in 15 months, the General Administration of Customs said on Friday, doubling from 7.2 percent in June and roundly beating market expectations. Exports were stronger than expected even after pricing in inflated export data in early 2013, when firms falsified invoices to skirt capital curbs.

Some analysts attributed the export spurt to delayed shipments caused by recent volatility in the yuan which may not sustain. Meanwhile, imports fell 1.6 percent versus a rise of 5.5 percent in June, leaving the country with a record trade surplus of $47.3 billion for the month.

“However, imports contracted 1.6 percent year-on-year, indicating soft domestic demand and a downward pressure on growth. Policymakers are likely to do more to support the domestic economy.”

A Reuters poll had predicted a 7.5 percent rise in exports, a 3 percent increase in imports and a trade surplus of $27 billion.

Financial markets firmed on the data with the Shanghai Composite Index rebounding. It rose 0.25 percent by midday from its intraday low, when it was down 0.32 percent.

After a weak start this year, China’s exports have shown signs of improvement helped by stronger global growth as well as supportive domestic policies and the effects of a weaker yuan.

“The external demand is improving as a recovery in major developed countries underpins the global economy,” he said.

Imports from China’s largest source for resources, Australia, dropped 5.7 percent, partly due to softer commodity prices but the fall adds to questions over the health of domestic demand.

Combined exports and imports grew 2 percent in the first seven months from a year earlier, trailing far behind the government’s full-year target of 7.5 percent.

The record trade surplus and pressure from capital inflows were seen renewing pressure on the yuan. The currency is poised for its third consecutive day of gains as the central bank signaled it was comfortable with stronger levels as the economy was improving.

“With Chinese economic activity improving, we believe that there is scope for RMB to further appreciate, driven by conversion of onshore FX deposits and increased foreign portfolio inflows,” analysts at ANZ said in a note.

That could create a fresh headache for China’s central bank, which intervened to weaken the currency earlier this year when it punished speculators betting on one-way yuan appreciation.

The government unveiled a burst of “targeted” policy stimulus since April, including cutting reserve requirements for some banks, hastening construction of railways and public housing and allowing local governments to loosen property curbs.

The Politburo, a top decision-making body of the ruling Communist Party, said last month that China must maintain a “certain speed” in its development over the long term to help resolve problems in the economy

The government is due to release inflation data on Saturday, and industrial output, retail sales and fixed-asset investment on Aug. 13. New loan and money supply data will be issued between Aug. 10-15.

CNH Industrial announces change to Board of...

CNH Industrial announces change to Board of Directors

US Imposes Curbs on Exports by China's Top Chipmaker SMIC